Sambousek is also called Sambouseh throughout Egypt and the Levant regions. It is similar to samosas, but with a different flavor and spice profile for the filling. In the Arab world, it is basically a fried dumpling of flaky and crispy dough filled with beef or cheese. Sambousek is a popular appetizer gracing Ramadan tables throughout the Middle East, and there are endless variations on the beef filling. I also developed some delicious vegan fillings with eggplant so that we can still enjoy a plant based version that is hearty. For my classic Sambousek recipe passed down in my family, I use an herb scented beef mixture, just like my Tunt Nagla in Egypt does. It involves sautéed beef and onions with plenty of dill, parsley, and a dash of jalapeño. I am always sure to make some Mediterranean cheese filled ones as well brimming with green parsley and dill, as it is easy to include and kids love them! These crispy and crunchy flaky pockets of dough stuffed with a variety of juicy and flavorful fillings make for a perfect snack, side, appetizer, or main course along with a salad. I share here three delicious fillings to suit every possible diet.

Sambousek dough can be made from scratch, and I recommend using a basic samosa dough such as this beautiful and crispy one by my friend Zakiya at BlendofSpice.com. She even has a handy step-by-step tutorial on how to fold the Sambousek in the exact triangle my aunt does with egg roll wrappers.

Like my aunt and mother, I always use ready made dough, usually in the form of egg roll wrappers. They are in any grocery store and easy to access, and they always come out nicely crisp and bubbly. I have found spring roll wrappers, wonton wrappers, and egg roll wrappers and tried them all. Egg rolls are my preferred choice for Sambousek, but I’d like to unveil the benefits of each type. I like to use different shapes for different fillings. I keep the beef Sambousek in a triangle, the veggie filling like eggplant or spinach in a half circle, and the cheese rolled like a cigar. They are all delicious!

These are my go-to. Egg roll wrappers are a little thicker and have more dough than a spring roll wrapper so these work out great. As the name implies, the dough has egg in it. This makes them thicker, crunchier, and more bubbly. The wrappers are bigger in size than spring roll or wonton wrappers as well, making them easier to handle, fill, and fold. They come in a large square shape, which I cut into 2 long strips to fold over into a triangle, just like a paper football. When fried, they become golden and crunchy with a bubbly texture.

Spring roll wrappers are thinner and smaller. They do not have egg in them, making them a great vegan option. They are also much thinner and more delicate. I prefer to use these to roll into a cigar shape, but they can also be folded into triangles as well. Spring roll wrappers bake to a nice golden crisp in the oven, so they are a great option if you want to avoid frying.

Wonton wrappers are similar to egg roll wrappers, with the same dough and a bubbly texture when fried. Wonton wrappers also taste delicious and come in a circle shape if you prefer to simply fold in half as a crescent. The wonton wrappers I have tried, are thinner than egg roll wrappers, but they are still easier to handle without breaking apart. They are also much smaller. They are usually about 5 inch squares that I simply fill in the center and fold over into a triangle (or a crescent if it is a circle). This makes a very thin and light Sambousek since it is only one layer of dough around the filling. If you prefer less dough and less carbs, then this would be a good option. They can also be pinched up into a bag shape and pan fried, which is a typical preparation for dumplings in Asian cuisine.

I am sharing three different fillings here. The beef is the exact same way my Aunt Nagla makes it. She lived in Saudi for a long time and the flavors are influenced by that region, where Sambousek is a national food. I created my own eggplant mixture to make a delicious savory plant based option, and the cheese is a combination of 3 amazing cheeses and herbs.

For the beef filling, I use browned minced beef cooked with garlic and onion until no liquid remains. I then add chopped parsley, dill, cilantro and an optional jalapeño. The mixture is then softened with a hard boiled egg mashed right in! It is such a surprise in there, but this has always been my favorite part as a kid. The filling can go in any direction, so this can be omitted if you prefer. The key is to make sure the beef stuffing is not left with any excess liquid from cooking.

For the eggplant mixture, I simply dice the eggplant and let it sit in a sieve with salt so all the bitter water drains. I then sauté it in olive oil with some diced peppers and onions and toss in the same herbs of parsley, dill, and cilantro. When the pan is dry and before adding onions, I toast some coriander spice to release some fragrant oils into the mixture.

The cheese mixture is a perfectly cheesy and flavorful mix of crumbled halloumi cheese, feta, and some chihuahua cheese combined with equal parts of chopped parsley and dill. The cheese:parsley ratio is 1:1. I love the earthy pop of green parsley and dill with the cheeses. I usually wrap the cheese Sambousek into a long cigar shape, similar to cheese borek. 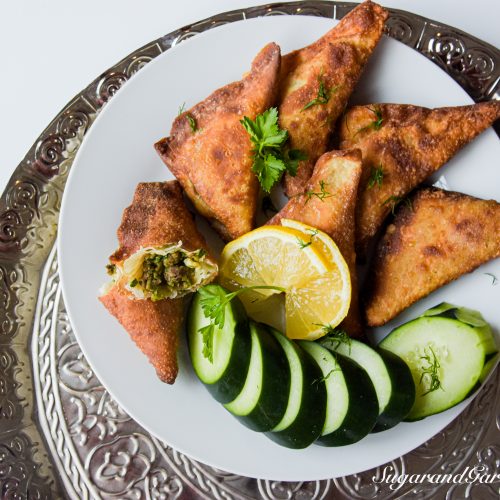 These crispy and crunchy flaky pockets of dough stuffed with a variety of juicy and flavorful fillings make for a perfect snack, side, appetizer, or main course along with a salad. I share here three delicious fillings to suit every possible diet.
5 from 1 vote
Print Recipe Pin Recipe
Prep Time 30 mins
Cook Time 10 mins
Course Main Course, Side Dish
Cuisine egyptian, Middle Eastern

For the Beef Filling

For the Eggplant Filling

For the Cheese Filling

For the Eggplant Filling

For the Cheese Filling 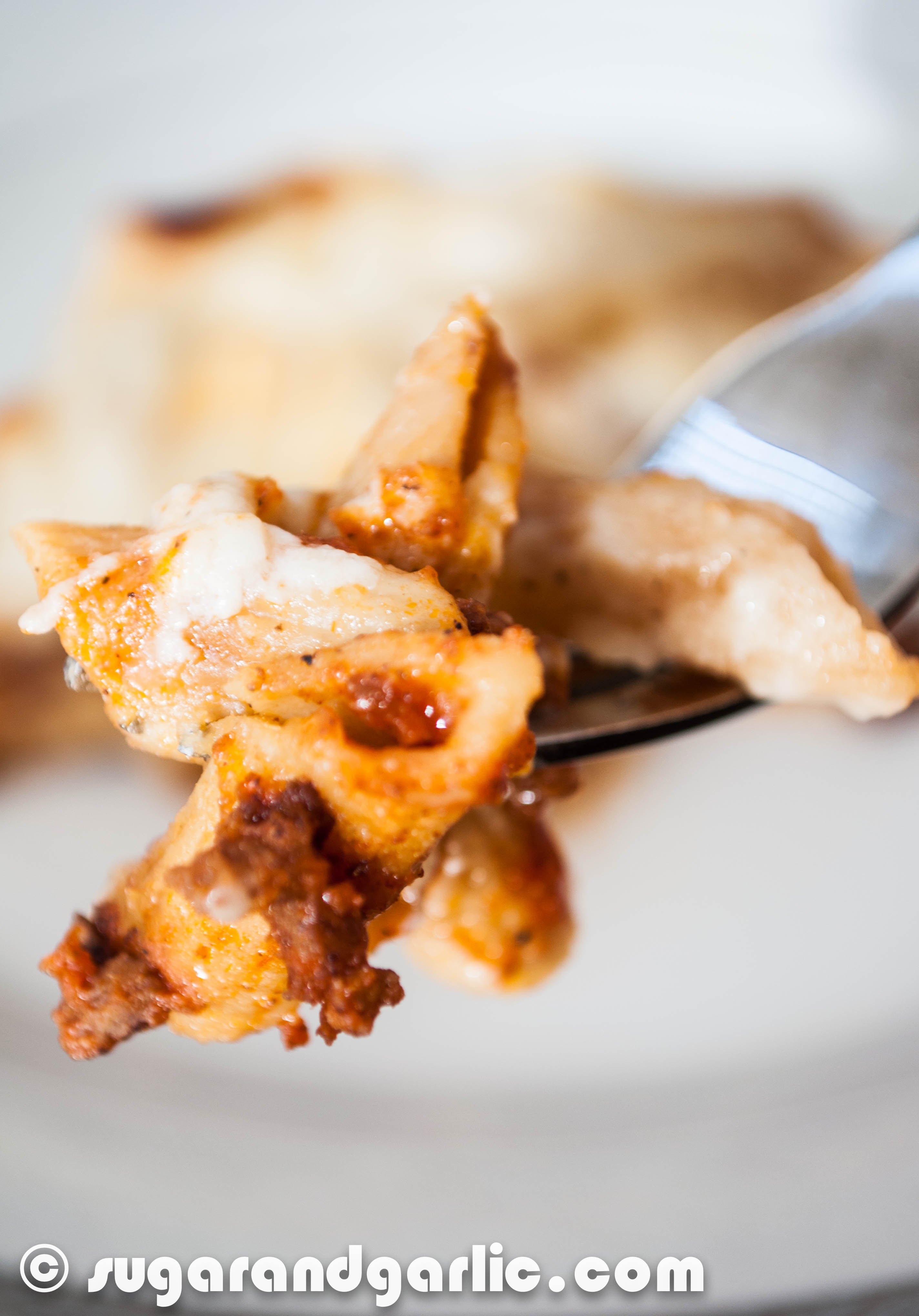 This is another classic Egyptian dish. Oozing a creamy béchamel sauce, savory beef, and yummy cheesiness, this pasta casserole will be a huge hit with the whole family. There are many variations to make this casserole slightly healthier such as using vegetables instead of […]

Beef and Lamb, Rice and Pasta
-
by Noha 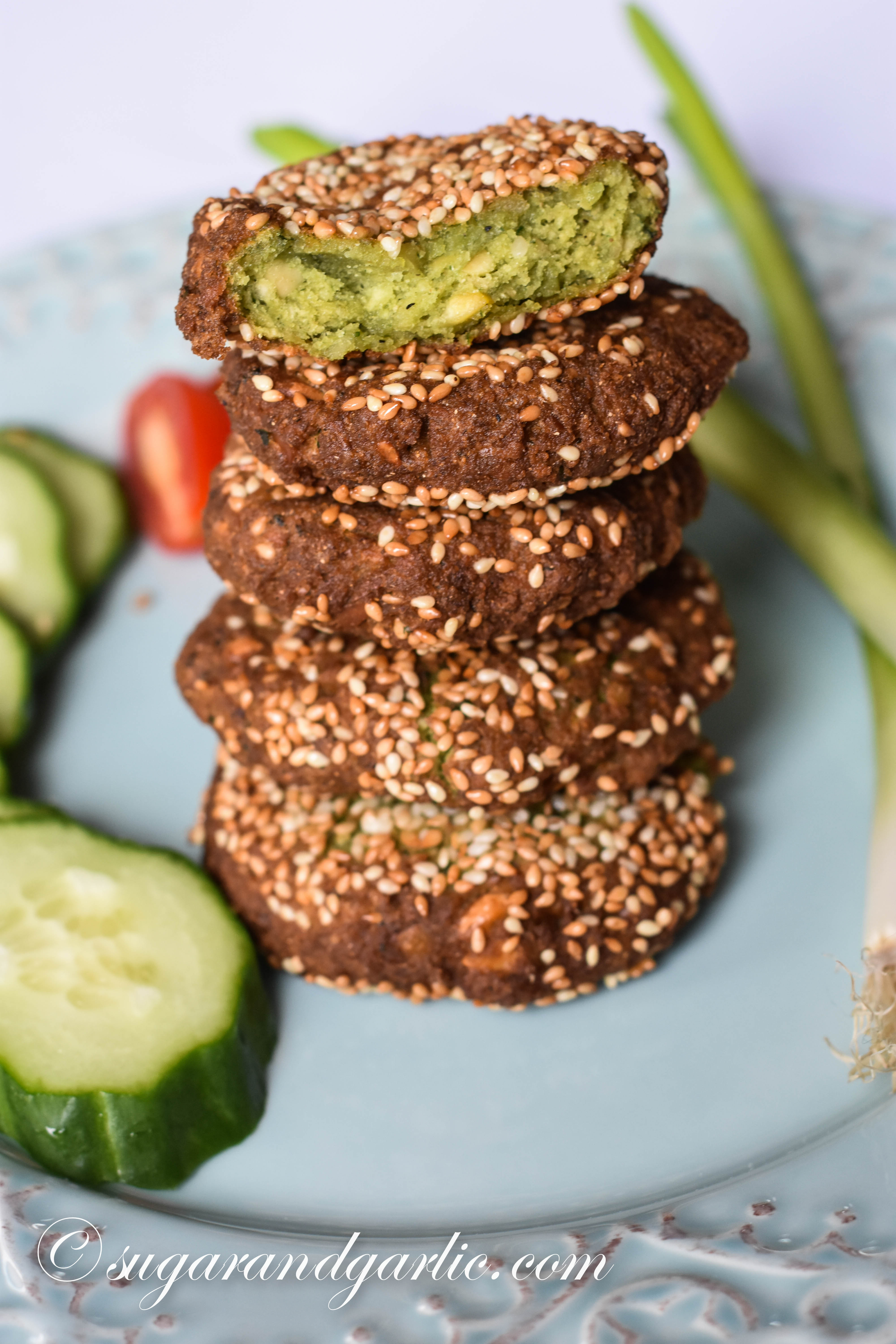 Egyptian Falafel, the best recipe out there (t’aamiya)

It has been a frequent complaint when we go out to eat at Middle Eastern restaurants: “they just don’t make falafel like they do back in Egypt.” We have tried countless places, and although it still may taste good, it doesn’t ever taste the same. Oh, […]